I see the world through a drinking straw. Only the smallest shards of light and life make it through to my eye. But there’s a payoff if I keep looking.

I saw the bear this morning, from the big picture window in my bedroom. He was near our shed, ambling unconcerned toward the woodpile. He was a small bear, probably young, his body coal-black against the weathered planks. I caught just a glimpse before he dissolved into the green-gray tangle of woods beyond.

A few weeks ago there was another bear, or the same bear (who knows?). I’d noticed a small chunk of shadow in the woods, something that hadn’t been there the day before, not a stump or a rock. But the woods are tricky, changing every day, and I’ve not memorized each element of the landscape. I’ve not memorized the placement of each branch, or the way sunlight slants against each ash and pine in that particular spot in the woods, at that particular hour of morning. But I do trust my instincts, so was not surprised, just gratified, when the dark chunk moved, then resolved itself into bear face, bear ears. He paced slowly through the trees, then was no longer there, or at least no longer there to my eye.

Fifteen years ago, I saw my first bear, also from my bedroom window. He moved like flowing water over the jumble of logs just delivered for firewood. I saw my cat Juno approaching, out of friendliness or curiosity. I suspect it was Juno’s first bear, too, because he quickly realized his error and fled. I loved that bear instantly, the beauty of him. But he was also competition: Shoo, bear! Those are my blackberries, almost ripe!

This morning’s bear didn’t stay long enough. I didn’t have enough of him. I kept looking at the woods where he had entered and vanished. But it’s like watching falling stars, or fish jumping. You see one; you look where it was, then another jumps, elsewhere. You have to look nowhere if you want to see one. Sometimes, you get lucky. 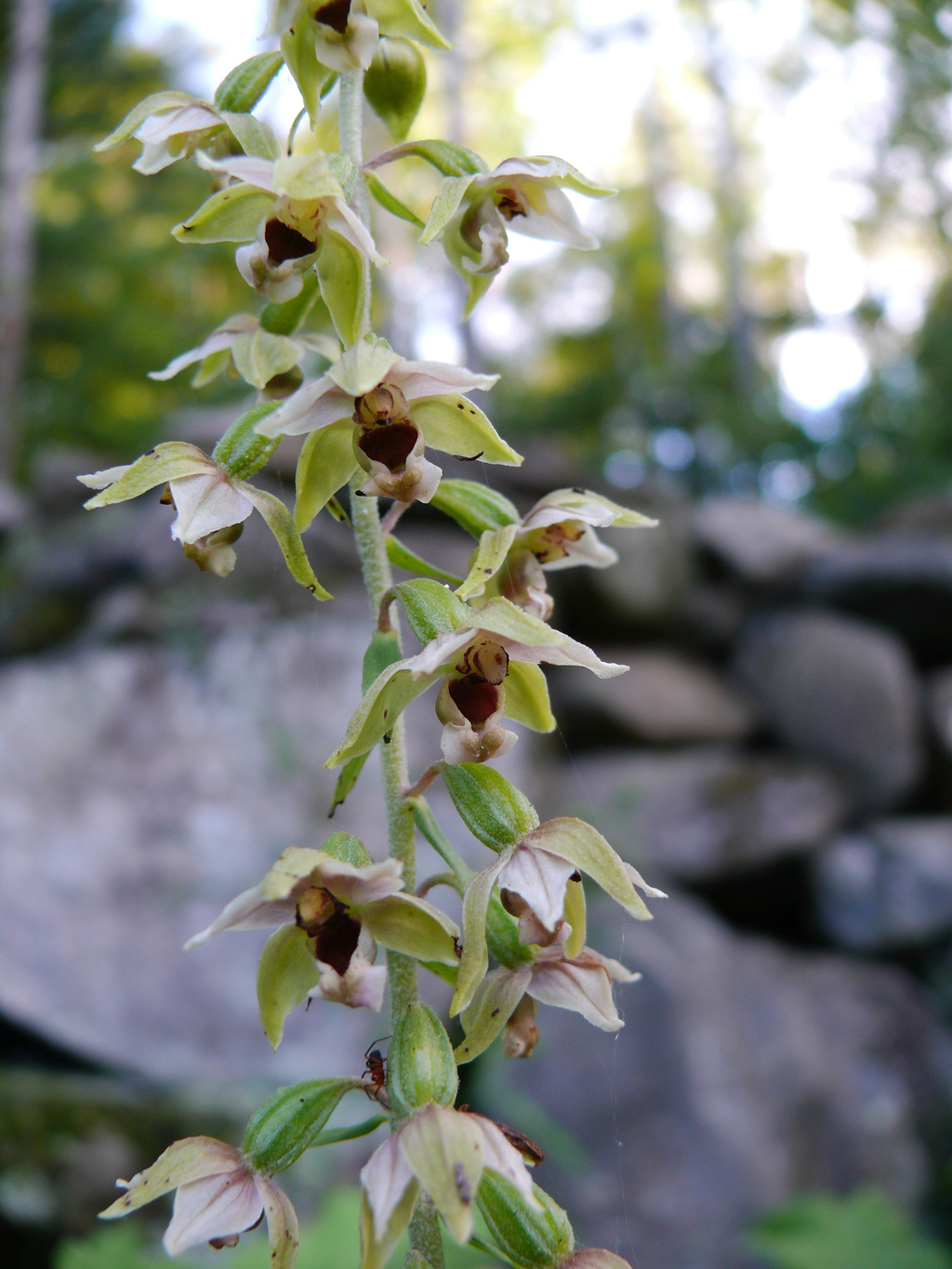 I found a wild orchid growing by the stone wall. It’s nothing like the one on my kitchen table, the one brought by a guest to say thank you for a nice meal. I had said: Bring nothing. Of course she had brought something. My kitchen orchid is a phalaenopsis, a Moth Orchid, which casts a line of big, moony blooms along a single slender stalk. Many of the species are white or pink, but mine is pale yellow, veined with scarlet. It had four blooms when it landed on my table eight weeks ago, and now there are eight, with still more to come. The breeder’s hand is evident here; it’s colorful, effusive, profligate. Bred to spend the inheritance, go for broke.

The wild orchid by my wall is more demure. It’s not blooming yet, but I can already see it in my mind’s eye. I’ve been on the lookout for this orchid for three seasons, since I found a few growing in the roadside waste a half-mile from my house. “Epipactis helleborine, leaves lanceolate,” the flower guide told me. Each has a single stalk with twenty buds the size of raindrops. Each flower will be no bigger than my thumbnail; each a perfect, miniature corsage, pale green, tinged with pink. But mouths open, agog, they’ll show a deep red throat.

I had collected seeds two years ago, each as small and weightless as a speck of black pepper, and spread them in a corner of my shade garden, hoping. No orchids sprouted there last year. I found another specimen this morning, farther up the wall, so maybe my own breeder’s hand is at work after all.

There are twenty thousand species of wild orchid in the world, and fifty native to New Hampshire. Each is a tiny ecstasy. This spring, hiking the Appalachian Trail on Moose Mountain’s western shoulder, I came upon six pink lady slipper orchids, blooming in a cluster by the side of the trail. Each pointed her bulbous pink bosom a different direction, looking like nightwalkers at a shipyard: Hey, sailor. These weren’t bred for show, but you’d never know it for looking.

I check the wild helleborines almost daily, but they’re on their own, they don’t need me. My kitchen orchid is a captive, domesticated. We have a deal: I give it water, light, maybe some plant food. It might need me, but who am I to pass judgment on domestication? There are few wild humans left, few who don’t live in captivity, if we define that as a life in which inputs and outputs are circumscribed, defined. 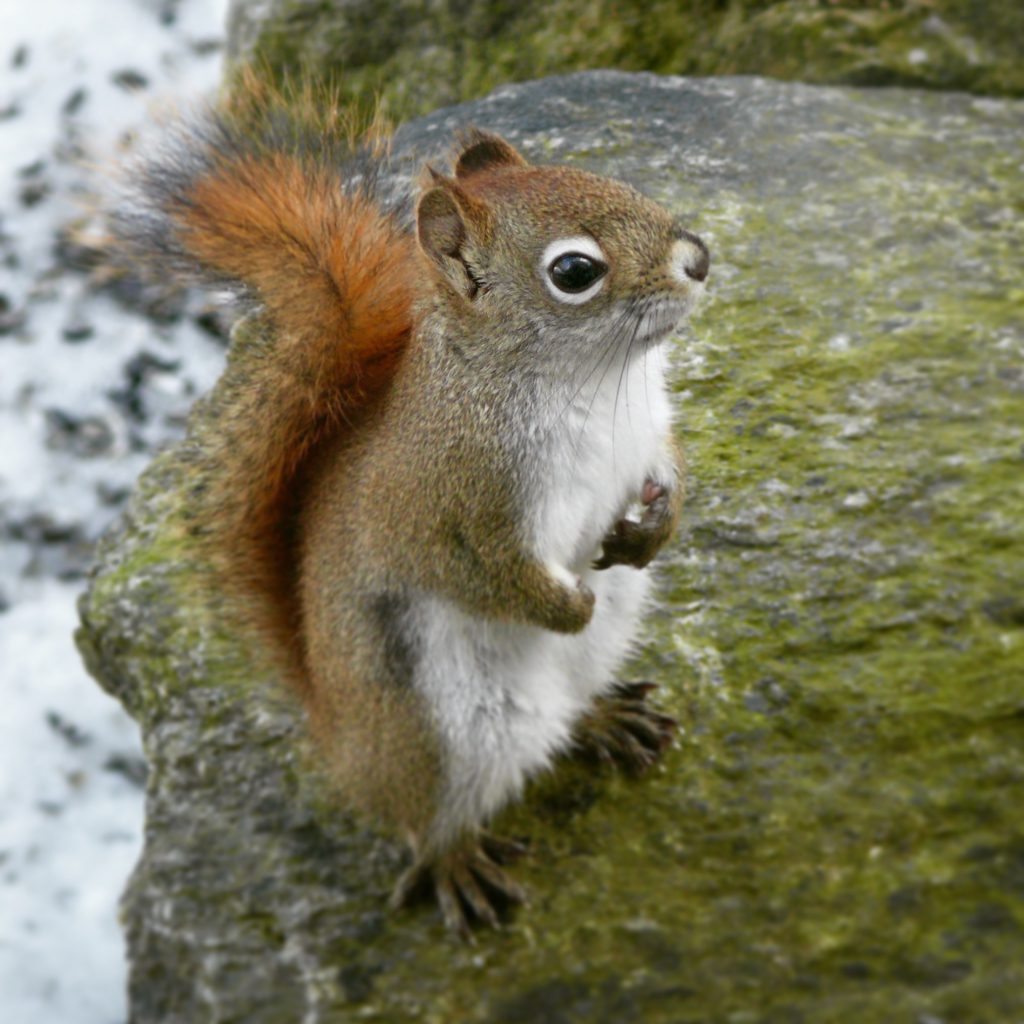 Two evenings ago, I offered a nectarine in the mulch under one of our big birches. The fruit was tragically molding on its blossom end a day after being brought home. At $2.49 per pound, I figured it was about a dollar’s worth of exotic, rapidly decaying produce, and damned if I would eat it, but damned if I would throw it away. So I gave it away instead, to the red squirrel; someone who, I imagined, would enjoy it. Nectarines are a luxury for the squirrel, but equally so for me. Neither of us has any real right to them, transported as they are from thousands of miles away.

By morning the fruit had vanished without a trace, without evidence of either struggle or delight. I contrived a story about the squirrel finding it, licking it quickly to appraise it, then stuffing hunks of its wet yellow flesh into her cheeks and hauling off the loot to her nest in the wood’s margin.

Last evening I scattered a small handful of moldering strawberries in the same spot, imagining the squirrel would find these, too. This morning they were still there. It had rained overnight, and the fruits were now sodden and collapsing, though still jewel-red. They’ll be gone later, though. I will not see them go. There will be no one around to witness the feast, except for the squirrel herself. So I must imagine another story, and tell it to myself again, keeping it fresh.

Or maybe I have it wrong. Maybe it wasn’t the squirrel who nabbed the nectarine. Maybe it was one of the chipmunks who lives in the stone wall by the orchid. Or the bear himself, or a skunk or raccoon I’ve never met. But Occam’s razor is sharp, and I like to keep it stropped. The squirrel is the answer that makes the most sense, because I see him running up that very birch trunk every day, to taste the sap leaking from its scars.

It’s impossible to know. The squirrel ate the fruit, and also did not. Schrödinger’s cat is dead, or is alive; the observation makes it real. But doesn’t the cat know? The cat doesn’t need anyone to tell her whether she’s dead or alive. She’s around to notice.

There’s a seasonal brook in the woods behind the house. It’s alive from April through early June, then dries up, mostly, except in a fissure under a large stone, where it relaxes all summer, black and stagnant. The water is still, without percussion, no sound in any sense, imagined or real. The mouse can come to drink the idle water, and the wood thrush can wash herself, and the mosquito larvae can drift undisturbed before their hatch. The deer is too big to stand in the gap between the rock and tree, but still, she could dip her head and nuzzle wet earth. And the owl can perch above, watching the night around him, sighing Who-ah! at the end of his phrase, waiting for the mouse.

We do hear the owls. 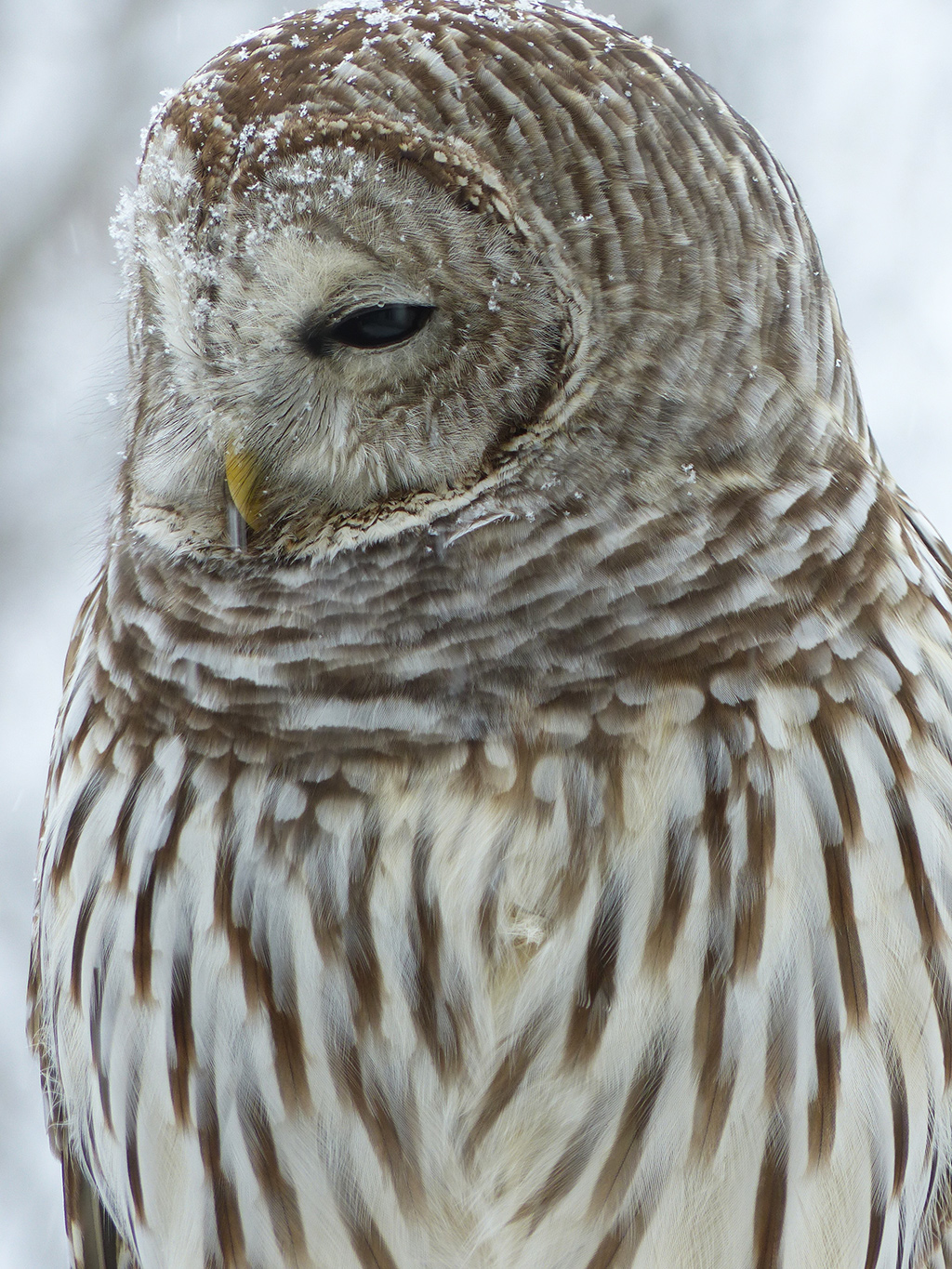 I see the world through a drinking straw. Only the smallest shards of light and life make it through to my eye. It’s easy to see the showy, sparkling differences. It’s easy to see contrast. It’s harder to look at the diminutive weeds, the blackness of a shadow, the trace of rotten fruit, the stillness of a pond and see the orchid, the bear, the squirrel, the owl. It’s harder to look at the evidence and divine the true story. But there’s a payoff if I look, and keep looking: I see.

Written By
Meg Maker
More from Meg Maker
Marriage equality? How was that even a thing?
Read More