When I was young I modeled for a life drawing class. Who was that person then, and who is she now?

In college, when I was deep into my painting studies, I began attending weekly life drawing classes at a local art gallery. It was challenging to draw from the model, especially at first, but it was terrifically instructive for my abstract work, grounding it in reality. And it was resonant, the sheer physicality of drawing somehow pulling me into sympathetic harmony with the model, a kind of pas de deux between model and artist. As she, or he, moved briskly through short poses, then longer ones, I followed the body’s contours brightly, capturing with deft, quick strokes the essence of the motion in crayon or ink. The sessions became a weekly practice in seeing and feeling, of empathy and engagement with form.

I couldn’t afford the course fee, so after a few sessions I worked out a deal in which I modeled once every six weeks in exchange for free attendance. Since I was also an artist, I knew what the other artists wanted: a twist in the torso, a complicated arch, a spiral body position. I had trained as a dancer, so was limber and flexible and fairly strong, and could move into these dynamic poses and hold them for long minutes. As a model, my body became a landscape; my job was to make that landscape rich and complex, challenging—even abstract. The idea was to transform myself into a complicated object, a thing more than a person, a What more than a Who.

After one of my modeling sessions, a fellow artist, Phil, handed me two pastel drawings he’d made that night. They were both from longer poses, twenty minutes each, so he’d had time to capture the details of my face, my hands, my hair and torso. Phil was about thirty years older than I, and had been drawing for decades. His drawings, like his paintings, were gestural, full of an adoring, exuberant attentiveness, each line a caress imbued with feeling. His work was sensual, sometimes tipping into sexual. Phil never could quite turn me into a What. 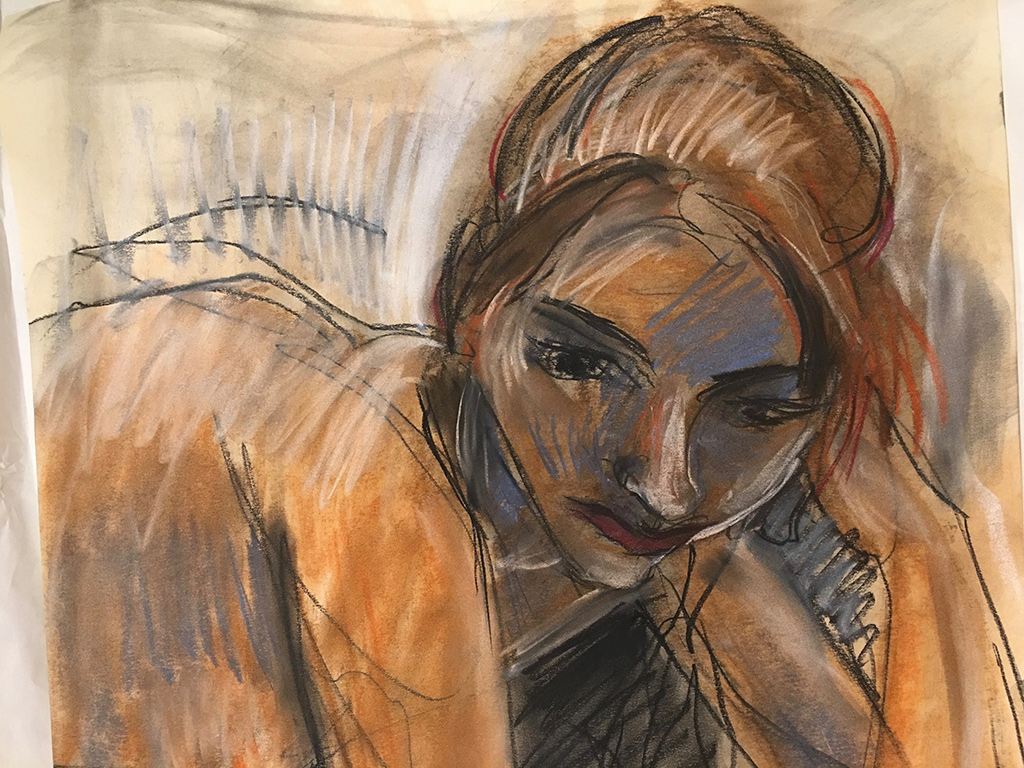 I took the drawings home that night and carefully stored them with liner paper, thinking one day I might frame them. That was twenty-four years ago. Now, pulling them from their wrappings, I see my younger self through Phil’s vibrant lens, two exquisite images that captured me in a tiny slice of time—forty minutes of my young life. Who was this young woman with the piercing eyes?

I want to hang them now, to try to answer that question. They’re nudes, so too provocative for our main living space; would I want my dinner guests to glance at them, as I poured the wine? But they could be hung in the bedroom, over the bed.

Why have I waited?

Written By
Meg Maker
More from Meg Maker
Now the storm was all around us, flashing and crackling as great...
Read More